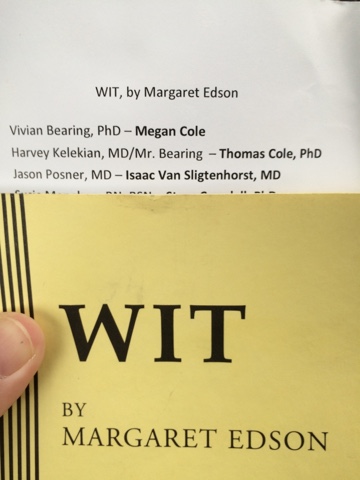 What a strange appearance after my name those two little letters make.  As if my name weren't long enough.  And oddly enough, separated by a comma.  A mere pause.  What stories there must be in the telling of the addition of those two little letters?  In this instance, a play with a professional actress, Megan Cole.  And what should this play be about?  An English professor dying of cancer.  What other role would I be "volunteered" for, of course, but an arrogant oncologist fellow trying to grasp his own humanity as life beats it either from him, or into him, depending on the point of view.  But it was a deep honor to be bear witness to Megan Cole's performance of death.  And life.  Just as I take the stories of all the patients who have helped me add those two little letters, hers is no less of potent tale.
Posted by Isaac at 8:30 PM 2 comments:

Through many countries and over many seas
I have come, Brother, to these melancholy rites,
To show this final honour to the dead,
And speak (to what purpose?) to your silent ashes,
Since now fate takes you, even you, from me.
Oh, Brother, ripped away from me so cruelly,
Now at least take these last offerings, blessed
By the tradition of our parents, gifts to the dead.
Accept, by custom, what a brother’s tears drown,
And, for eternity, Brother, ave atque vale
‘Hail and Farewell.’
Posted by Isaac at 2:05 PM 1 comment:

For, he thought, it’s a special hour. Women never wake then, do they? They sleep the sleep of babes and children. But men in middle age? They know that hour well. Oh God, midnight’s not bad, you wake and go back to sleep, one or two’s not bad, you toss but sleep again. Five or six in the morning, there’s hope, for dawn’s just under the horizon. But three, now, Christ, three A.M.! Doctors say the body’s at low tide then. The soul is out. The blood moves slow. You’re the nearest to dead you’ll ever be save dying. Sleep is a patch of death, but three in the morn, full wide-eyed staring, is living death! You dream with your eyes open. God, if you had strength to rouse up, you’d slaughter your half-dreams with buckshot! But no, you lie pinned to a deep well-bottom that’s burned dry. The moon rolls by to look at you down there, with its idiot face. It’s a long way back to sunset, a far way on to dawn, so you summon all the fool things of your life, the stupid lovely things done with people known so very well who are now so very dead – And wasn’t it true, had he read somewhere, more people in hospitals die at 3 A.M. than at any other time . . . ?
......So what do we do? We men turn terribly mean, because we can’t hold to the world or ourselves or anything. We are blind to continuity, all breaks down, falls, melts, stops, rots, or runs away. So, since we cannot shape Time, where does that leave men? Sleepless. Staring.
Three A.M. That’s our reward. Three in the morn. The soul’s midnight. The tide goes out, the soul ebbs. And a train arrives at an hour of despair. . . . Why?
- Something Wicked This Way Comes by Rad Bradbury

I know the passage well and I know I have used it before.  But as I sit here sleepless at 3 am, the passage becomes a talisman that protects me from myself.  I use the gifted writing as a defense to avoid relying on my own words as that would require rising up from the deadness within to draw breath, and give my pain its own language.  I naively assumed that graduating and starting residency would ease the transition of my own soul.  But here I am, still awake at 3 am.  Plus ça change, plus c'est la même chose.  The things change, the more they remain the same.